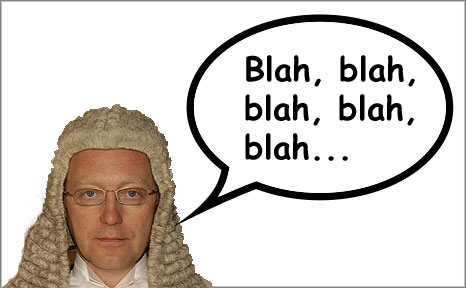 For the benefit of the confused, I thought I would clarify Mr Justice Ryder's final report on the modernisation of family justice, by reference to the following selected quotes from the report (numbers in parentheses refer to paragraph numbers in the report):


"During phase one, there will be a strong emphasis on leadership and management development for the judiciary and the introduction of new management information to support leadership judges in their management of the court’s judicial resources." (10)

"In parallel with phase one of the programme, evidence-based good practice pathways and supporting materials will be published which the Family Court will use to improve the outcomes for children involved in cases by reducing delay." (11)

"The court will be operationally managed by the Family Business Authority of the HMCTS Board, which was created under the Framework Document of April 2011 to reflect an agreement reached by the Lord Chancellor, the Lord Chief Justice and the Senior President of Tribunals on a partnership between them in relation to the effective governance, financing and operation of HMCTS." (13)

"One of the keys to better performance in reducing delay is the more effective management of existing judicial resources. This will be provided by better patterning of judges and magistrates to enhance experience and to provide judicial continuity." (26)

"These problems can be traced to poor deployment practices: patterning, continuity, allocation and listing, and these are all matters for the judiciary. The leadership judges in the new court will need to give clear deployment instructions to their unified family administrations and be well informed in their discussions with HMCTS and the Presiding and Family Division Liaison Judges." (28)

"FDLJs and DFJs will have a webbased resource providing examples of existing protocols and agreements with other agencies which have already been successfully trialled and which can help to reduce delay by using agreed standard processes." (36)

"The court must be adept to scrutinise whether the evidence that is necessary is already before the court and if it is, why further expert assessment or analysis is necessary on the same issues. To do otherwise where no complaint about the methodology or factual basis of existing evidence is identifiable, suggests that the court is being asked to provide a multi-layered alternative to judicial decision-making which is inappropriate." (41)

"During the course of this next year expectation documents will be published which will describe agreements that have already been reached with family justice agencies to describe in plain language what the court can expect from existing or new processes which are fundamental to the court..."(49)

"Deployment guidance will be issued by the President to describe the principles to be applied to the itineraries and sitting patterns of judges and magistrates, the allocation of proceedings and listing of hearings including the development of protocols to permit judicial continuity where judges and magistrates sit in other jurisdictions." (68)

"Protocols will be published to enable ‘mixed ticket’ judges to provide judicial continuity in each jurisdiction under arrangements managed jointly by resident and designated judges." (69)

"Expectation agreements will be agreed with agencies to describe what the family court should expect of them." (73)

I hope that makes it all clear!
Labels: Family Justice System