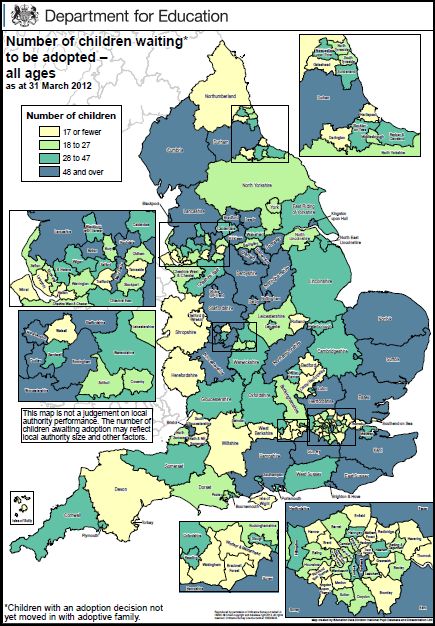 The Department for Education has today launched two initiatives aimed at increasing the number of adoptions and speeding up the process.

Secondly, a helpline is opening today, offering advice for people who want to adopt. The First4Adoption hotline can be accessed on 0300 2220022 between 10am and 6pm Monday to Friday. The hotline is run by a group of three charities: Coram, Coram Children's Legal Centre and Adoption UK. Staff will advise people about routes they could take to adopt a child, groups they could speak to and the support available.


"We know many potential adopters out there can provide children with loving, stable homes but simply don't know where to start. These new tools will give many more people support in taking the first steps to adopting a child and giving them the chance to succeed in life."

The initiatives have attracted some criticism. The Association of Directors of Children's Services have said that the map is a "crude measure... which cannot be used to judge 'good' or 'bad' authorities", and the helpline has been called a "gimmick" by Francesca Polini, who ended up adopting abroad after facing, what she describes, as too many hurdles in the UK. The map has also been described as a “simplistic approach” to a complex subject by the British Association of Social Worker’s Acting Chief Executive Bridget Robb.

The adoption map can be found here, and a Department for Education press notice, here.
Labels: Children