Friday Review: Triumph and... not much else

Well, there weren't many actually, but at least the hideous nightmare of Xmas and the New Year is over, so it is no longer necessary to pretend you are having a good time, when patently you are not. 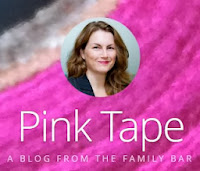 Clearly, the biggest news in family law is the re-vamping of Lucy Reed's Pink Tape blog. It now has a 'cleaner' template, a more 'modern' look and is easier to read. Alas, the 'blogroll' is one of the victims of the change, but I suppose that has had its day, harking back as it does to the long-lost era of the 'community of bloggers', all helping one another up the Google ladder. I'm also not entirely happy with the way it defaults to a mobile version on my iPad (I prefer to look at 'full' sites), but that's just me being a dinosaur. Overall though, Pink Tape is now triumph of style and substance. Add it to your blogroll if you still have one.

On the subject of top blogs, Adam Wagner at the UK Human Rights Blog put The Times on the naughty step for (remarkably) not being aware of Article 12 of the ECHR - the right to marry. I suppose this is what happens when you hand over control to sub-editors, but even so you would have thought that The Times would get such a basic thing right.

Another newspaper, The Observer, informed us that "MPs from all parties are backing a tough US-style law that would make domestic abuse a specific offence carrying a sentence of up to 14 years in prison." I'm always a bit dubious about calls for more laws, but if it succeeds in reducing domestic violence as its supporters suggest it will, then that must be a good thing, mustn't it?

Meanwhile, the Observer's sister newspaper The Guardian reminded us that the courts are already spending considerable time and resources dealing with domestic violence, as it reported the annual spike in cases over Xmas. So much for the season of goodwill.

And then there is John Hemming MP. The latest episode in his, ahem, interesting career involves him being suspended from the Mumsnet forums. The reason, apparently, is that he broke their guidelines on identifying anonymous posters by naminig a certain barrister with whom he has had "a few disagreements in the past which are not worth going into". Hemming apparently raised the old "I didn't read the rules" defence, which always goes down well in courts of law. Hemming also admitted drinking whilst using the forums. but claims to have been "sober without a hangover" when he wrote the post that caused him to be suspended.

I will end with my favourite tweet of the last week (or so):