Monday Review: For those who want to listen

Lucy Reed does a complete hatchet job on the latest outpouring from Christopher Booker at The Telegraph in this post on Pink Tape. Whilst I agree with all she says, I wonder whether it is an exercise in futility, as it is unlikely to make the slightest bit of difference to the way Mr Booker and his ilk report in future, and it may even encourage them. After all, any publicity is good publicity, isn't it? 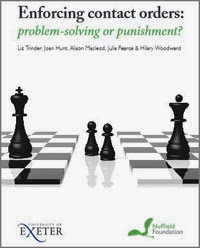 It's taken rather longer than expected, but the full report of the University of Exeter Law School upon their research into the enforcement of contact orders (as mentioned in this post last July) has been published (not sure about the chess reference on the cover, left, - after all, you can't fight over your own pawns). The 'headline' finding, as mentioned in the briefing last July, is that adequate punitive sanctions are already in place to enforce contact orders. As I said in this post, I suspect that this finding will not come as music to the ears of some, particularly fathers' rights groups. Here is an extract from the conclusion:


"...what emerged was that the public perception of the nature of enforcement cases is inaccurate. Implacably hostile mothers ... do exist and do unreasonably frustrate contact and defy the court. But their numbers are very small. Systematic analysis of a nationally representative sample of enforcement applications revealed that most enforcement cases are not about an implacably hostile parent but rather troubled or conflicted sets of parents,significant safety issues and children making reasonable and understandable decisions to limit contact."


"The courts are ... acting appropriately in the great majority of cases by focusing on facilitating co-parenting, implementing protective measures or heeding the nuanced views of older children. In only a handful of cases were the courts insufficiently robust in handling implacably hostile parents..."

Accordingly, they recommend that policy should "refocus somewhat away from the few implacably hostile cases requiring punitive sanctions and towards finding sustainable, safe and child-centred solutions to the full range of enforcement cases."

I shall finish with this example of our caring society (could be a good place for lawyers to advertise their probate services?):