Saturday Review: Something new, something old

Anyone foolish enough to be a regular reader of this blog will find that some things (in fact, most things) will be changing around here. No, I'm not going to use a new template (although that may come later, if I should feel so inspired), but the regular features will for the most part be going, to be replaced by these 'Review' posts looking at notable recent developments, which will appear whenever I see fit, rather than on a particular day each week. So, without further ado:

I will begin with an interesting development in France, where it is reported that a plan to allow divorces by mutual consent to proceed without a judge is under consideration. Such divorces would be dealt with by clerical staff, leaving judges to deal with more complex cases. This sounds very similar to the 'divorce by administrative process' proposal of the Family Justice Review (see paragraph 4.162 et seq), and is surely the way of the future.

There seems to have been some confusion as to exactly which day is 'Divorce Day'. Some said it was last Thursday, the first day back at work after the Christmas/New Year break. Some said it was Friday. Others say it is this Monday, and I've even seen mention of a 'Divorce Week' (!). I really think this important issue should be resolved. Perhaps our ubiquitous President should deal with this, rather than such trivia as the Family Court, 26 weeks, transparency etc. etc.?

I shall finish this brief first review post with a couple of slightly risqué oldies but goodies:

First this from Instagram (I think the quote was originally accredited to Robin Williams): 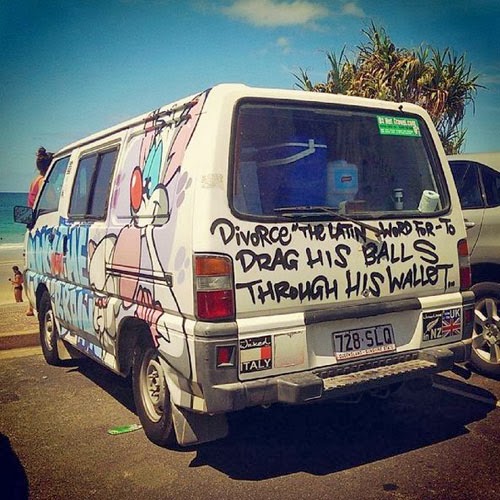 
The only time my wife and I had a simultaneous orgasm was when the judge signed the divorce papers. ~ Woody Allen #divorce
— OstaraGetsADivorce (@EostraStChinde) January 4, 2014

Enjoy the rest of your Saturday!
Labels: Divorce