Book Review: The Family Court without a Lawyer - A Handbook for Litigants in Person, 2nd Edition 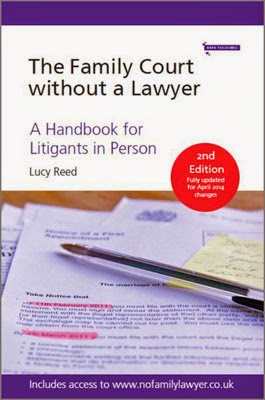 The Family Court without a Lawyer


A Handbook for Litigants in Person, 2nd Edition

With a slightly different title to reflect the existence of the new Family Court, this is the second edition of Lucy Reed's guide to self-representation in family matters. You can find my review of the first edition here.

So, what is new? I will leave Lucy to explain:


As will be seen, the book updates the law, including all of the changes that took place last April. It also provides more information regarding alternatives to court proceedings. As a result, as Lucy points out, the book has increased in size, as is the way with all new editions of legal textbooks.

The book also now boasts a foreword, written by Mr Justice Cobb, who points out that the book is not just for litigants in person, but is also for their families and for their McKenzie Friends (in fact, I can imagine this being a general handbook for all McKenzie Friends involved in family law work). It is even a useful handbook, he says, for those who have representation. I agree with him on all points.

Despite the changes, the book follows a similar format to the first edition, being organised into the same seven parts as before:

1. Understanding The System - including chapters on the courts, lawyers and support, and where to find the law.

2. Putting It Into Practice - including what to expect at court, general procedure, evidence and a chapter on running your case.

3. Divorce, Separation & Finances - the law and procedure on these areas, including a chapter on finances for separating cohabitees.

4. Children - the law and procedure in matters concerning children, including chapters on child abduction and children cases for non-parents.

5. Domestic Violence & Abuse - the law and procedure on domestic violence.

6. After Judgment - including enforcement, costs and appeals.

7. Toolkit & Resources - including a glossary, a list of internet resources, a table of cases, precedent forms and templates (with working versions of many available to download from the book's accompanying website, www.nofamilylawyer.co.uk) and extracts from rules and statutes.

As one might imagine, the main updates are to Part 1 in respect of the family court, legal aid (I understand the book was actually revised in March last year to accommodate the legal aid changes then) and sources of help, and to Part 4, covering the changes in respect of children law and procedure, including the new child arrangements orders and the CAP. For example, the chapter in Part 1 on lawyers and sources of support now includes sections detailing those situations for which legal aid is still available and a short section on mediation providers. The new sections are written in the same accessible but authoritative style as before.

There are also some updates elsewhere, such as a new section on legal services orders and maintenance pending suit in the chapter on finances for divorcing couples or civil partners.

Apart from those updates (which are substantial), I noticed some re-writing of chapters or parts of chapters (such as the chapter on cases involving domestic violence and abuse), although it would take too long to compare editions for me to say just how much has been re-written. With that proviso, much of the book does not appear to have changed, and that is not necessarily a bad thing.

One small criticism I had previously was of the layout of the book. This has improved, for example with better fonts in places, and the feel of the book has improved, although I'm not entirely sure why - different paper and/or printing process, perhaps?

There is, of course, even more need for a book such as this since the abolition of legal aid for most private law family matters last year. Any assistance that litigants in person can find is welcome, but finding general advice as useful and reliable as this is pure gold. If you are in the unfortunate position of having to represent yourself in the Family Court, then you simply cannot do better than obtain a copy of this book, which you can do from the book's website, mentioned above, or from Amazon, including a Kindle edition.
Labels: Book Reviews