Surge in non-molestation orders since LASPO 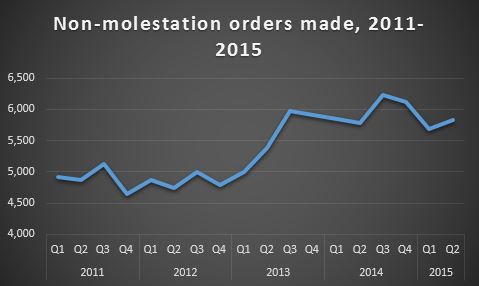 It couldn't have taken a genius to foresee that the so-called 'domestic violence gateway' to legal aid introduced in April 2013 when legal aid was abolished for most private law family matters by the Legal Aid, Sentencing and Punishment of Offenders Act 2012 ('LASPO') might lead to the system being abused by those in need of legal aid. It would seem that the statistics in respect of non-molestation orders ('NMOs') indicate that this has been the case.

This post was prompted by an email I received from a husband who was on the receiving end of what he considered to be an unmerited NMO, obtained using false allegations. He has since obtained freedom of information data which indicates not just that the number of NMOs granted by the courts has increased nationally, but also that there have been particularly large increases in certain courts. I will come to his data in a moment, but I will begin with the latest family court statistics which are, of course, freely available.

The graph above was created from those statistics. It hardly needs any comment, showing a clear and sustained increase in the number of NMOs granted since April 2013. Prior to that, there were roughly 5,000 NMOs made per quarter, whereas now there are more like 6,000, an increase of about 20%. Now I'm not a statistician, but I would say that that was 'significant'.

Turning to the FOI data, the startling figures relate to the above-mentioned increase in the number of NMOs made by certain courts, which are considerably higher than that 20% figure. For example, NMOs from 2011 to 2014 went up by 110% at Horsham Family Court in Sussex, and Birmingham Family Court saw a huge 375.4% increase. Dare I say it, but could this be due to the 'tactics' of local legal aid firms, eager for work?

I have also been informed that the matter of increased NMOs has been raised with Shailesh Vara MP, Parliamentary Under-Secretary of State for Justice. He admits there has been an increase in NMOs since the changes to civil legal aid, but is confident that court procedures for granting of NMOs are sufficiently robust that they are not being obtained with the sole aim of getting legal aid.

I've always felt that one of the problems with NMOs is that judges are just ordering respondents not to do what they shouldn't be doing anyway - as they are not therefore infringing upon the respondent's liberty, they find it easy to make the orders 'to be on the safe side'. However, an NMO does have other implications. For example, as Sir James Munby said in a speech to the Families Need Fathers AGM last year, "a wrongly granted without notice order sets the tone of proceedings thereafter".

Sir James also stated that if "there is in fact a significant increase that would concern me and I would investigate it". Perhaps the time has come for him to do that.
Labels: Domestic Violence Legal Aid