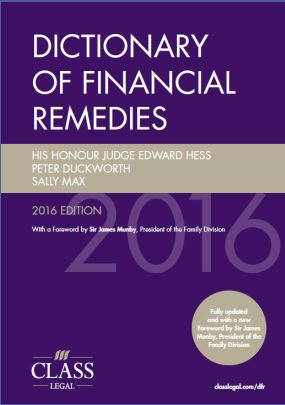 Now in its third edition, the Dictionary of Financial Remedies seems to be settling into a pattern of annual updates every February. (For my reviews of the first and second editions, see here and here.)

What is new in this edition? Well, this time there are no new entries, but we are told that several entries (on companies, confidentiality and foreign assets) have been substantially rewritten, and that the 'efficient conduct' entry (covering Mostyn J's Efficient Conduct of Financial Remedy Final Hearings statement) has been enhanced with a new section on allocation by complexity. Further, as one would expect, the Duxbury, tax, inflation and life expectancy tables have all been updated with the latest figures, new cases from the last 12 months (no  fewer than 60 of them, including Wyatt v Vince, Prest, Sharland and Gohil) have been referenced and  all other entries have been 'fully reviewed and updated where necessary'. The net result of all of this is that the Dictionary has expanded, from 87 to 93 pages. Its price has not, however, increased, remaining at £50, the same sum as the first edition.

In their introduction the authors express the belief that the Dictionary "is becoming an indispensable tool for practitioners and judges in this area, commonly taken to court for ready use." They also point out that it was cited by the President (who has once again added a new foreword) in the case CS v ACS & Anor (see paragraph 15).

No longer practising, I can't say whether the Dictionary is becoming an indispensable tool for practitioners. However, I am sure that for those who have invested in it it has already become a very handy point of first reference, providing concise summaries of many of the financial remedy points that are likely to come up in practice, and saving the time that might otherwise be spent delving into less succinct tomes. Of course, like any reference it must be up to date, but for such a modest annual outlay a new copy each year is a no-brainer that is likely to be repaid many times over.