The price of separation: The Ombudsman's report on complaints against divorce lawyers 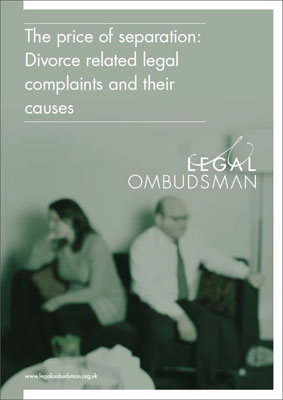 The Legal Ombudsman has today published a report "looking at issues around family law complaints and focusing on divorce". The rationale behind the report is made clear in its first paragraph:


"Family disputes currently give rise to more complaints to the Legal Ombudsman than any other type of dispute. Around 18% of the complaints we investigate are about family law. Of these, just over half are related to divorce. That is echoed by other findings about the level of customer satisfaction with divorce lawyers: for instance, research has found that dissatisfaction levels are higher in divorce cases (13%) than for other areas of law (average of 7%)."

We are then told that:


"The aim of this report is to attempt to cast some light on why divorce leads to higher levels of dissatisfaction and more complaints than other areas of legal service. What can lawyers – and consumers – do to avoid finding themselves in disputes about the service that has been provided? How can both parties protect themselves against deepening the distress of relationship breakdown with a subsequent dispute between lawyer and customer? And how will the coming changes to the legal sector – legislative, administrative and financial – impact on the situation?"

Unsurprisingly, the report tells us that the largest area for complaints on divorce is cost, with around one quarter of the divorce complaints the Ombudsman deals with being on this issue. The report gives the usual advice: keep the client updated as costs mount. We are then given a couple of examples of how things can go wrong, including the case of 'Miss A', who was told to pay costs of £15,000 over what was agreed with her solicitors, including £4,000(!) for photocopying.

The next section of the report discusses the tension between law as a vocation, with lawyers bound by a professional obligation to act in the best interests of their client, and law as a business, with lawyers needing to maximise their returns in order to survive. We are given an example of a case where neither party were willing to compromise, with the result that the complainant's costs amounted to nearly £70,000. The Ombudsman found that the solicitors had provided a reasonable service, but had neither sought to challenge their client’s approach nor inform her of her mounting costs.

The report then moves on to issues of quality. We are told that around 18% of divorce related complaints are about the lawyer failing to provide adequate legal advice, with the key issue often being the poor standard of information provided to the client.

The next, short, section of the report explains that it is not always possible to 'put things right' with monetary compensation, and points out that in some cases minor issues with the solicitor's service have no effect upon the outcome, with the result that the complainant rejects the Ombudsman's decision to take no action.

The report concludes that:


"...there are very good reasons why we can expect there to be more complaints about divorce than almost any other area of law. However, it is possible for lawyers and customers to manage the risks inherent in divorce better."

We are then given eight case studies, demonstrating complaints made to the Ombudsman, whether or not they had merit.

The report can be found here in html format, or here, in pdf format. The Ombudsman has also produced a consumer guide, containing ten 'helpful tips' to using a divorce lawyer, which may be found here.
Labels: Divorce Legal Profession