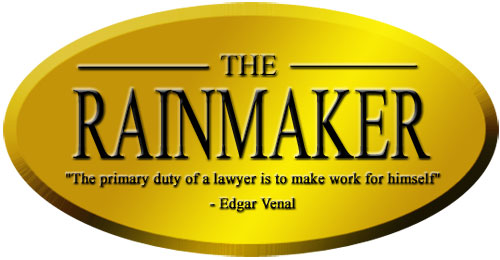 AT THE OFFICES of Messrs. Venal & Grabbit, Solicitors, Sly is consulting his friend and divorce lawyer, Edgar Venal.

"Of course," says Sly, "most of my assets are already out of the country, for tax reasons."

"In fact," continues Sly, "I have so little left in this country that I wouldn't be bothered if my wife got the lot. I'm only worried about her finding out about my foreign assets and getting her hands on them."

Edgar ponders for a moment, as an idea strikes him. "I think I may have the answer." He says.

"It's a little radical, but it should work." Says Edgar.

"Well, the best way for your wife to find out about your foreign assets is through you. Her lawyers will want to question you to find out where all your money has gone." Says Edgar.

"Well, what if you were to disappear? Then her lawyers couldn't get their hands on you." Says Edgar.

"Why don't you leave the country, with no forwarding address? You could stay in my villa on Mustique, while you sort out somewhere to live permanently."

A week later, at the offices of Messrs. Amber, Lance & Chaser, Solicitors, Ebenezer is once again in a state of panic.

"Where's Sly?" He asks Dick Shifty. "He's not been in the office for days, and hasn't told anyone where he's gone, or when he'll be back. The striking out hearing is on Monday!"

Dick shrugs his shoulders. "I guess you'll have to do the hearing yourself." He says.

Ebenezer's heart sinks. How is he going to repay his loans if the case is thrown out?
Labels: The Rainmaker Venal and Grabbit