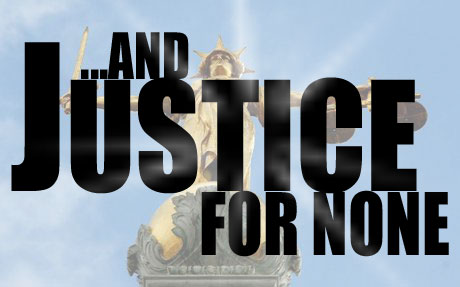 ARTHUR CONSCIENCE was fuming. As he and Judge Dodgy had entered the courthouse surrounded by members of the press anxious to witness the downfall of a member of Her Majesty's judiciary, the Judge had calmly leant over to him and whispered: "Perhaps I should have bribed Sir Marmaduke."

Arthur was outraged, both at the suggestion that his good friend Sir Marmaduke D'Ranged QC would have accepted a bribe in return for acquitting Judge Dodgy, and at the blatant admission of guilt by Judge Dodgy.

Arthur is so angry, in fact, that he is considering shopping Judge Dodgy in his opening speech, telling the court and assembled media that Judge Dodgy does accept bribes.

He keeps mulling the idea over in his head as he listens to the prosecution case. He knows that shopping a client in court could spell the end of his (highly promising) career, but what did he come into the law for other than to uphold truth and justice?

Arthur still hasn't come to a decision when the time arrives for him to make his opening speech.

He rises to his feet.

Just at that moment the courtroom lights go out.

The hearing is adjourned briefly, while the court generator is switched on. During the adjournment Arthur calms down and realises that his career is, of course, more important than his principles. After all, principles could not keep him in the style to which he has already become accustomed. Anyway, Judge Dodgy was right: it is a lawyer's duty to do his best to get his client acquitted.

And that is just what he does.

After the trial and the crowds have dispersed, Arthur sits on the courthouse steps, deep in thought about his decision to go ahead and defend Judge Dodgy.

A figure comes up to him. Arthur looks up. It is Edgar Venal. Arthur senses that Edgar knows exactly what Arthur is thinking about, although Arthur cannot understand how he could know.

Edgar pats Arthur on the shoulder. "You did the right thing." He says, with a smile.


THE END
Labels: And Justice For None Venal and Grabbit