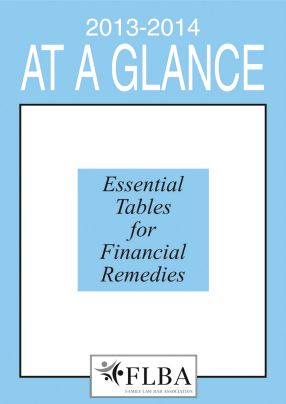 It's remarkable to think that another year has (nearly) elapsed since I last reviewed At A Glance. As I said then, reviewing it almost seems pointless, as surely all family lawyers worth their salt already buy a copy every year, and who would be interested in a review of a publication they already have, or will be buying anyway?

Well, I suppose there may still be a few who haven't seen the light, and perhaps a few more who think they don't need to invest in a new copy every year. To the former I would say that the word 'essential ' on the front cover is not included for fun. To the latter, I would say that being caught in court (to borrow a phrase from the back cover) with out of date information could easily cost far more than £55 (the tables are, of course, fully updated each year).

There is not a lot that is new in this year's edition, but that is not the point of At A Glance (having been going for twenty-two years one would expect that they have a good idea of what is and is not 'essential'). Indeed, we are told in the Preface that in its current format it is at capacity, the staples unable to contain more pages. Nevertheless, room has been found to expand the Pensions Overview to include mention of the new National Employment Savings Trust and the Social Security Benefits table to include the Benefits Cap, Universal Credits and Personal Independence Payments. The IFLA Arbitration Scheme also now has its own section, complete with a new Procedural Table.

The final section 'Other Financial Remedy Materials' appears to contain the same useful items as last year (relevant statute and rules extracts, list of leading cases etc.), although I note that the fight for space has led to the current calendar being moved to the inside back cover.

I can think of nothing more to say (for examples of the tables that At A Glance contains, see my previous review), save to mention the sombre tone of the Preface, which talks of the difficult times faced by the family justice system, particularly due to the "tragically melancholy demise" of public funding, "which threatens swiftly to engulf and maybe even to overwhelm the judicial system ... with a tsunami of LIPs". Let us hope that next year there will be reasons for a little more optimism.

At A Glance can be purchased from Class Legal, here.
Labels: Book Reviews Finance/Property