Friday Review: Visions of the future

This week began, like so many seem to have done before, with a promise from the government to placate Tory backbenchers by bringing forward proposals for a transferable tax allowance for married couples and civil partners. It is said that the proposals will make couples £150 a year better off. Somehow I can't see this encouraging many cohabiting couples to rush to the altar, and even Tim Loughton, who is attempting to introduce the reform in the Finance Bill this week (thereby forcing the government concession), accepts that it won't stop families breaking up. Hmm. Single-parent charity Gingerbread not surprisingly call the whole idea 'incredibly ill-judged', and Hugo Rifkind in The Spectator calls it 'patronising'.

Moving on (well, strictly moving back to last Friday, but still after last week's Review), Lucy Reed at Pink Tape posted a vision of the Brave New World we could be facing, with a man asking for guidance via social media as to whether he should accept a position as a family law paralegal, despite the fact that this will inevitably lead to him working for 'skanks'. Like Lucy, I will offer no comment, save to ask: would you employ him?

On Wednesday Family Law Week informed us of a joint statement by the President of the Family Division and HMCTS London Region in respect of the single family court, although the statement is actually dated April this year. Whatever, we are told of some of the key features of the new court. All very interesting, but I'm afraid I still can't muster much enthusiasm until such time as the family court has its own buildings, separate from the (other) civil and, in particular, criminal, courts (something that is never likely to happen, at least not in the current financial climate).

Whilst fruitlessly looking for news of the statement on the Judiciary website (where the PDF resides), I came across this Family Court Guide. Only currently including guidance and documentation relating to public law matters, it nevertheless looks like a useful new resource, containing links to legislation, rules and other guidance. 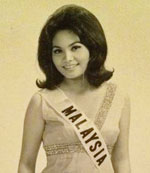 And finally, The Telegraph today gives us a story that fulfils all of the public's basest desires when it come to divorce stories: glamour, celebrity and lots of money. Former Miss Malaysia Pauline Chai (left, seen in happier times) is attempting to divorce her multimillionaire husband Khoo Kay Peng, one of Malaysia's wealthiest businessmen, in England, where it is thought she will receive a considerably larger settlement (perhaps as much as £500m, which would make it by some margin this country's largest ever divorce payout) than in Malaysia. The case has certainly entailed some spirited legal argument, with lawyers for Dr Khoo telling the High Court that allowing the case to be heard here would enhance "the ill-gotten reputation of this country for being the divorce capital of the world", and Richard Todd QC for Ms Chai responding that their arguments "boiled down to an "old-fashioned grubby desire to be in the Jurisdiction where [Dr Khoo] thinks he can do better"". Great stuff.
Labels: Friday Review