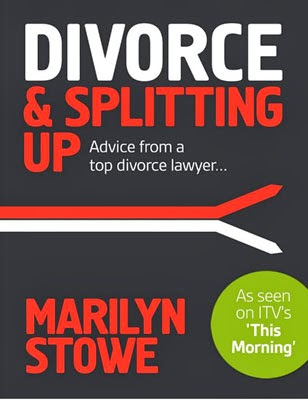 Advice from a top divorce lawyer

I realise that I am a little late with this review, as Divorce & Splitting Up has been available since January, at least in Kindle format, but I have only just obtained a copy of the more recent paperback version. Bear with me - I assure you it will be worth it.

Marilyn Stowe of course needs no introduction. She has been described by The Times as "one of the most formidable and sought-after divorce lawyers in the UK" and is the Senior Partner at Stowe Family Law, the UK’s largest specialist family law firm. What, then, is her motivation for writing what is described on the back cover as "the essential how-to book for anyone who is getting divorced or splitting up from a partner"?

She explains this in the Preface where she says that she was motivated by the reduction in access to a lawyer caused by the Government's virtual destruction of legal aid for family matters, and the desire to do something to help.

What do you want to know?
The book is divided into eight parts, covering an enormous amount of ground in its 328 (printed) pages:

I - Let's Stick Together - Unusually (uniquely?) for a book by a divorce lawyer, an examination as to whether the marriage has, indeed, broken down, and the alternatives to divorce.

II - Getting Divorced - Practical advice not just upon the steps involved in the divorce process, but also such matters as alternative dispute resolution, choosing a good solicitor and helping your solicitor to get the best for you.

III - Cohabitation and Civil Partnerships - What you need to know if you are cohabiting or in a civil partnership.

IV - International, Expat and Cross-Border Divorce - Advice for anyone involved in a divorce with an international dimension.

V It's The Money, Honey - An explanation of how the courts approach and deal with financial issues on divorce, together with advice regarding such matters as prenups and tracking down hidden assets.

VI - How To Do Your Best For Your Children - Including sections dealing with the law upon resolving children disputes, child support and helping your children through the divorce.

VII - What Could Go Wrong? - Including dirty tricks by the other party (I rather liked the example of a wife who sawed off the legs of a Chippendale cabinet, before delivering it to her husband), how to behave in court and other pitfalls, such as illegal snooping (with particular reference to Imerman).

VIII - How To Move On - Covering both practical and emotional matters.

The book concludes with some closing remarks from Marilyn, a list of useful resources (including, I am honoured to say, a certain blog that you are presently reading), acknowledgements and a brief index.

Dear Marilyn
The book is interspersed with summaries of cases from Marilyn's 30-year career, together with many letters to Marilyn requesting her advice upon legal or emotional aspects of relationship breakdown, to which Marilyn gives her expert reply.

These interludes add a real and practical dimension to the main text, both adding to the advice already given and clarifying how that already given applies in practice.

Invaluable advice
Divorce & Splitting Up is not, I think, intended to be a comprehensive DIY guide for litigants in person (although it would no doubt be of considerable benefit to them). Rather, it appears aimed at helping those going through relationship breakdown make informed choices and avoid common mistakes, both before and after instructing a solicitor. In this it is entirely successful - a treasure-trove of legal, practical and emotional advice from someone at the very top of their field. It sounds trite, but anyone in the unenviable position of facing a breakdown of their relationship cannot fail to benefit greatly from a read of this book.

How does this fit in with the goal of helping those who can no longer obtain full legal representation? Well, as I have said it will be of benefit to the litigant in person, but it will also help to reduce the costs of those who do not or cannot self-represent, at least for the entirety of their case, by helping them deal with those matters they can themselves, by avoiding expensive errors and by getting the most from their legal representation, thereby keeping their legal costs to a minimum.

Cheap at twice the price
Divorce & Splitting Up retails at £5.99 for the paperback edition, or just 99p for the Kindle edition (all proceeds going to The Children's Society). Quite where else you could get so much wisdom from such an expert in her field for such a low price, I do not know. Everyone can afford 99p, so there really isn't any reason why anyone going through relationship breakdown, whether represented or not, should not buy this book.

Divorce & Splitting Up sold 2,500 copies as at August. This is no surprise, and no doubt the final sales figure will be considerably higher than that.
Labels: Book Reviews Divorce