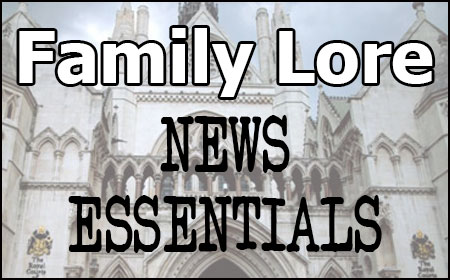 Family justice system 'under sustained and heavy attack' - Munby
The outspoken former president of the family division has called for urgent action to stop the private family law system from falling to its knees or worse as a result of damaging criticism. Full story: Law Society Gazette. You can find his speech here.

CASES
Her Majesty's Attorney General v Akhter & Anor [2020] EWCA Civ 122 (14 February 2020)
The Attorney General appeals from the decision of Williams J to pronounce a decree nisi of nullity. The ceremony which he determined entitled the Petitioner to a decree took place at a restaurant in London on 13th December 1998 ("the December 1998 ceremony"). It was an Islamic marriage ceremony, a Nikah, which the parties knew was of no legal effect and which they intended would be followed by a civil marriage ceremony compliant with English law. Judge's order must be set aside as there was, in this case, no ceremony in respect of which a decree of nullity could be granted. Full report: Bailii.
Labels: News Essentials