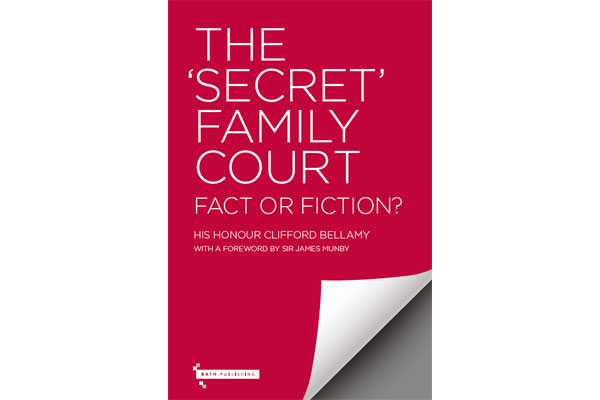 Well, that's quite a title for a book. For longer than I care to remember the media and those with a grudge against the family justice system have consistently claimed that the family courts operate a system of 'secret' justice. In fact, that cliché has become so commonplace that I think many use it now without even realising it.

But many do of course know exactly what they are doing. They purposely use the word in a derogatory fashion, to tar the entire family justice system in a way that the gullible public will fall for.

Of course, the system could respond to the charge of secrecy in one of two ways. Either it could rise above it and ignore it, or it could rise to the bait and respond.

Many in the system chose to do the latter, and this book is the latest in their attempts to address the charge.

His Honour Clifford Bellamy will of course be well known to any regular reader of the law reports over the last 15 years or so. In fact, Sir James Munby tells us in his foreword to the book that Judge Bellamy (as I shall call him) heads the list of Circuit Judges as the most prolific publisher of judgments on Bailii, despite having retired just over a year ago.

Judge Bellamy is clearly therefore a supporter of what (for better or worse) we now refer to as 'transparency'. Accordingly, it is no surprise that he should be the author of this book.

The first seven chapters of the book require little comment, at least for those who, like me, have been following the 'transparency debate' for some years. They essentially set out the current law on privacy in the family courts, in particular in relation to proceedings concerning children (the focus of the book), and the rather convoluted (and sometimes complex) history of attempts to 'open up' the system, in response to criticism.

The next two chapters deal with the media, including the critical issue of accurate, unbiased reporting. After all, there is no point opening up the courts if the media still choose to report in accordance with their preconceptions, or what they believe will sell newspapers. Judge Bellamy accepts that some journalists are irresponsible, but feels that they are in a minority.

After a brief look at 'legal blogging', i.e. blogging lawyers attending and reporting upon hearings, Judge Bellamy turns his attention to research related to open justice, followed by an interesting look at how other countries (Australia, New Zealand, Canada, Scotland, Northern Ireland and Eire) approach the issue. Judge Bellamy is unconvinced by what those jurisdictions are doing.

Chapter 14 deals with the critical issue of the child's right to privacy, the primary reason for the family courts not being fully open. Here, Judge Bellamy sits on the fence, pointing out that neither the right to privacy nor the right to freedom of expression should take precedence.

And finally we come to the most important part of the book. In chapter 15 Judge Bellamy sets out his 'reflections', and this is followed by an unnumbered chapter in which he sets out 13 recommendations for change. I will not go into detail here, for fear of 'spoiling it' for readers. Some of the recommendations are quite radical, some are quite minor. Whether together they will be sufficient to get the anti-family court brigade onside, I very much doubt.

Oh, and what of the question raised in the title to the book? Well, again I will not give the game away. Suffice to say that some will of course agree with Judge Bellamy's conclusion, and others will disagree...

But whatever your view, this is an important book, dealing with a subject that has been topical for years, and that no doubt will remain topical for years to come. I thoroughly recommend it to anyone with an interest in the discussion - you will be better informed, even if you do not agree with the conclusions.

The "Secret" Family Court: Fact or Fiction? can be purchased from Bath Publishing, in print and/or digital format, here.