Should the wealthy pay more to use our courts?


Quickly scanning the judgment of Mr Justice Mostyn in Collardeau-Fuchs v Fuchs this morning I am reminded of the recurring argument: should the wealthy pay more to use our courts?

The case concerns a wife's application for maintenance pending suit. I will make no comment upon either the merits of the application or its outcome. What struck me was the figures involved. We are told, for example, that the husband’s total net assets were said to be an eye-watering £1,245,532,056, and that in 2020 the parties required some £1,236,390, just to cover their living costs. The costs of their travel and holidays that year were £1,228,669.

But the wife was not impecunious. Although the proceedings are yet in their very early stages, she had already managed to incur legal costs of £467,793 (the husband had only spent £450,189).

And we all know that these very high-money cases invariably take up huge swathes of court time. One can only guess at the actual cost to the taxpayer.

Surely, those who can afford it should make a significantly greater contribution towards that cost?

Quite how this might be achieved is a matter for discussion. For example, back in October I had a brief conversation about this on Twitter with the leading family lawyer David Hodson. The conversation went as follows: 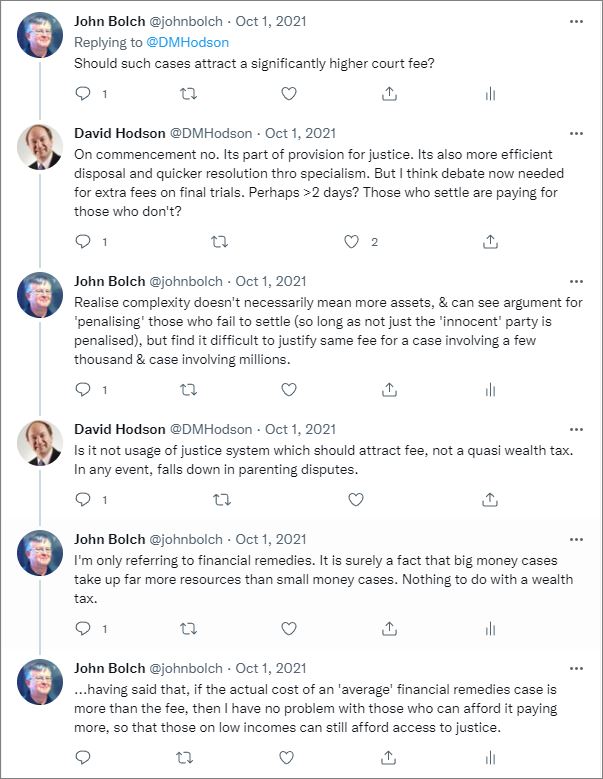 As can be seen, David was in favour of those who use more court time paying more, but not in favour of higher initial fees for the wealthy.

But perhaps I am more radical. It still doesn't sit right with me that people of such means should pay so little to have access to the family courts. Maybe there could be a system similar to that used in civil proceedings, where there is  a sliding scale for fees, dependent upon the value of the claim.

In this particular case the wife sought MPS of £350,000 per month (no, that isn't a typo). Perhaps the fee in such a case should be, say, one tenth of the annual amount claimed? Obviously, the actual cost of the proceedings to the taxpayer might be less than that sum, particularly if the case is settled, but then there could perhaps be a refund.

Yes, I know that such a system has obvious flaws, but I am sure that it is not beyond the wit of man to come up with a workable system, that is fair both to the court user and the taxpayer.